Androgenetic alopecia (AGA) is also known as male-pattern baldness and is the most common cause of hair loss. Approximately 50% of men are affected by the age of 50, and thinning of the hair can begin as early as the age of 12 and as late as 45. Although the condition is benign, the psychosocial ramifications of AGA can be significant. A major determinant of AGA concerns testosterone (T), more specifically the enzymes that affect androgen metabolism. Testosterone is essential for health and well-being and it is a steroid hormone from the androgen group and is found in mammals, reptiles, birds, and other vertebrates.  In men, T plays a key role in the development of male reproductive tissues such as the testis and prostate as well as promoting secondary sexual characteristics such as increased muscle, bone mass, and the growth of body-hair.

On average, in adult males, levels of T are about 7–8 times as great as in adult females, but, as the metabolic consumption of T in males is greater, the daily production is about 20 times greater in men.

The 5-α reductase isoenzymes (type I and II) convert T to dihydrotestosterone (DHT). The levels of both types of 5-α reductase are increased in the frontal-balding follicles compared with the nonbalding follicles found in the back of the head demonstrating that these isoenzymes contribute to AGA. Dihydrotestosterone levels are also increased in the balding scalp compared with the nonbalding scalp. Furthermore, women have 3–3.5 times less 5-α reductase than men, which probably accounts for why female AGA is less severe in most cases than with male AGA. Interestingly, individuals born without 5-α reductase type II do not develop AGA.

Aromatase is an enzyme that is part of the normal androgen metabolism that may have protective effects on AGA. Aromatase converts T into estradiol and estrone and thereby results in less conversion of T into DHT. Aromatase is found in much higher levels in female scalps with six times in the frontal scalp and four times in the occipital scalp than in men. This may explain why women who suffer from AGA may still be able to preserve their frontal hairline.

Androgen receptor proteins are responsible for the signal transduction in the hair follicle that promotes the conversion of a thick, strong terminal hair into a miniaturized, fine hair. Interestingly, ARPs have the opposite effect in the beard and moustache, promoting thicker follicles in these areas at puberty.

One of the hallmarks of AGA is the conversion of thick terminal hairs into miniaturized, vellus-like hairs. This process of miniaturization (i.e., shrinking of hair volume and growth length) is usually an indication that one is undergoing hair loss. The main mechanism for miniaturization relates to the shortening of the anagen phase, i.e., the hair becomes “lazy” and does not grow to its full term.

Considering countless variations in hair-loss patterns, many classification schemes exist to define types and extent of baldness. The most widely accepted standard is the Norwood or Norwood-Hamilton classification for male-pattern baldness that was based on a study of a thousand adult men with male-pattern hair loss classified by the type of hair loss and age of the onset. Some of the findings were as follows:

Typically, AGA occurs early in most cases between the age group of 15 and 25 with lifetime progression. Most oftentimes, the clinical course is a gradual one with periodic episodes of increased hair loss. Maximum pattern is usually attained by when one’s age is 50, with ongoing thinning occurring throughout the remainder of one’s life (Fig. 1.4). 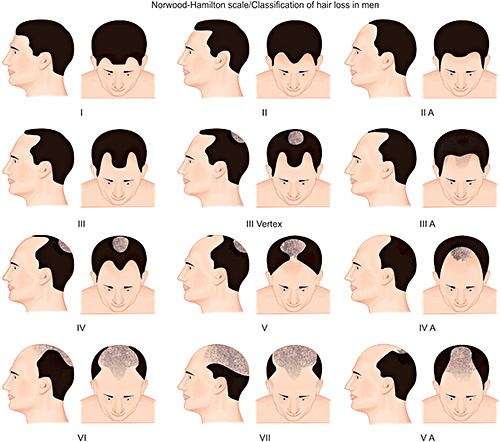 Figure 1.4
The Norwood or Norwood–Hamilton Scale grades degrees of male-pattern baldness. Type I shows minimal to no hair loss along the frontotemporal expanse. Type II exhibits both frontotemporal recessions that do not extend farther than a line drawn through a coronal plane 2 cm anterior to the external auditory canal. Type III hair loss refers to frontotemporal recession that extends posterior to the coronal plane that lies 2 cm anterior to the external auditory canal. Type III vertex indicates hair loss that primarily affects the vertex (or crown) region with or without accompanying frontotemporal recession that does not exceed, as described in Type III. Type IV reveals greater frontotemporal loss than exhibited in Type III along with marked hair loss in the crown area but with a moderately dense swath of hair that bridges the intervening expanse between the two areas. Type V hair loss shows more extensive alopecia in both the frontotemporal and vertex areas with only a small bridge of dense hair between the two areas that remains. Type VI hair loss reveals a complete absence of any remaining hair that separates the two now confluent areas of alopecia. In addition, the hair loss is more extensive laterally and posteriorly. Type VII represents the most severe expression of male-pattern baldness with only a narrow-horseshoe configuration that remains along the posterior and lateral border of the hairline. Norwood also classified a variant of hair loss that afflicts approximately 3% of male patients with alopecia in which the frontotemporal recession marches progressively posteriorly in a uniform fashion without a central, anterior peninsula of hair. Type IIA refers to a condition in which the entire anterior hairline is receded uniformly across the forehead but does not extend any farther posteriorly than 2 cm anterior to the midcoronal line. Type IIIA reveals alopecia that extends to the midcoronal line. Type IVA signifies alopecia that has extended past the midcoronal line. Finally, Type VA indicates significant recession of the hairline into the vertex, and severer forms of this variant become indistinguishable with Types V and VI
All patterns of male-pattern hair loss tend to progress in stages and increase in prevalence with the age of the man. However, family history of male-pattern hair loss may be helpful in estimating probabilities for your future hair loss but cannot be predictive with complete accuracy.